Q LLC, the highly proclaimed gun manufacturer that is known for its Honey Badger Pistol, was recently served a cease and desist order by The Bureau of Alcohol, Tobacco, Firearms, and Explosives (more commonly referred to as ATF).

The cease and desist came with the news that the Honey Badger Pistol, formerly classified as a pistol, would be reclassified by the ATF as a short-barreled rifle (SBR).

“The Firearms and Ammunition Technology Division examined the Honey Badger Pistol manufactured and marketed by Q, LLC, and determined the firearm is a short-barreled rifle as defined under the NFA,” wrote the ATF.

It continued, “A short-barreled rifle is subject to the registration, transfer, taxation and possession restrictions regarding these regulated firearms, which include criminal penalties.”

Here’s our beef with that

The Honey Badger Pistol has been sold for years as a pistol.

A sudden change in classification points to a much larger issue at hand within the firearms industry, due to the legal ramifications surrounding how guns are classified.

Take the Honey Badger Pistol (classified as an SBR instead of a pistol) as a perfect example. As an SBR, it is subject to federal regulation under the National Firearms Act, and there’s a $200 transfer tax for manufacturer’s accompanying the change. That can add up very quickly with as many firearms as a company as Q LLC produces.

The reclassification has gun owners and manufacturers across the nation in upheaval, as it undeniably shines a light on the self-serving motives of the ATF. There’s nothing quite as frustrating as new legislation that instantly turns responsible gun owners into felons. 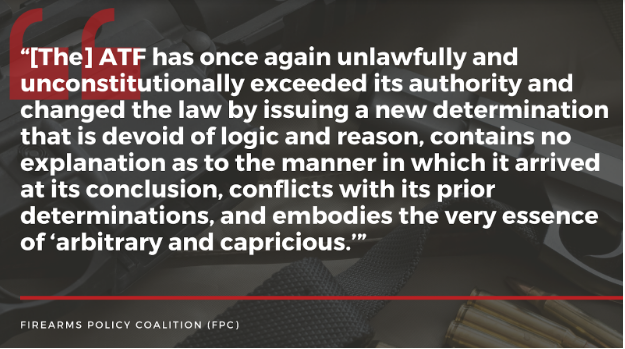 We wish the issues stopped there

As if the reclassification itself wasn’t bad enough, the ATF took things a step further in a letter to Q LLC.

The ATF called into question firearms that Q LLC manufactures that use the most popular brace on the market, the SBA3. Below is an excerpt from SB Tactical, the manufacturer of the braces used on Q's rifles:

SB Tactical, in conjunction with the Firearms Regulatory Accountability Coalition, Inc., (FRAC), and the National Rifle Association, stands in solidarity with Q, LLC. and is disappointed by the recent ATF actions in classifying their Honey Badger pistol as a short-barreled rifle.

This classification is based on a seemingly arbitrary set of criteria and promises to create unnecessary confusion and anxiety amongst millions of legal gun owners and the industry as a whole.

The ATF is saying, in part, that they will not evaluate an accessory as a stand-alone product, but that the characteristics of the entire firearm influence their decision.

Characteristics such as optics chosen, magazine capacity, how the gun is marketed, or length of pull will “holistically” determine a firearm’s NFA classification.

Moreover, the ATF has, to date, refused to clarify or state what characteristics define a Pistol Stabilizing Brace. They have stated that “they will know it when they see it”.

This arbitrary approach is creating confusion and uncertainty for millions of law-abiding citizens, manufacturers, retailers, and wholesalers. SB Tactical is the inventor of the Pistol Stabilizing Brace and is deeply committed to our customers, the Second Amendment, and the rule of law.

The ATF’s approach is unfair and unlawful.

SB Tactical will, undoubtedly and unwaveringly, continue to support Q, LLC. We are tirelessly working with congressional leadership, the White House, and the Department of Justice to ensure that legal gun owners’ rights and the rights of manufacturers are not in jeopardy.

It is our hope that the ATF’s latest policy interpretations, politically motivated or not, are corrected and that the confusion created can be reversed.

This kind of behavior from the ATF should frighten all gun owners, as it shows that they are willing to ignore past rulings, rights, and our precious freedoms.

Again, this kind of legislation has the potential to ban accessories that already owned and used by millions of people, instantly turning good, upstanding, gun-owning citizens into felons unless they choose to comply with the ATF’s inconsistent behavior.

The country is at the edge of a very slippery slope, to say it candidly. It’s commonly known that Joe Biden desires to ban online sales of firearms, semi-automatic weapons, and tack on other restrictions should he win the candidacy. See our article on this topic here.

When the ATF came for the bump stocks, many felt that banning accessories like this was always their end goal.

Coming for accessories such as SB tactical braces allows them to hurt gun manufacturers and consumers alike, without any consequences.

What you can do

As gun owners and protectors of the Second Amendment, we need to do all that is in our power to end this arbitrary assault on Q LLC and pistol braces.

Our rights have diminished too much already, and we need to be vocal, and take a stand before we lose any more.

Use the link below to contact the Department of Justice directly. Be candid about your feelings on the matter and let them know that the behavior from your elected representatives and their appointed leaders in the ATF is unacceptable.