Recently we reported on an unjustified and ambiguous decision by The Bureau of Alcohol, Tobacco, Firearms, and Explosives (ATF) to issue a 60-Day cease and desist order on the production of the Honey Badger pistol, manufactured by Q LLC.

The ATF had previously drafted a letter to Q LLC, stating that the Honey Badger pistol had been classified as an NFA firearm and henceforth would need to be registered through the ATF form 2.

If you’re unsure what that means or the ramifications, read this article.

Here’s how it’s all playing out

Both Gaetz and Collins delivered a statement due to the constituents who fought hard to bring it these congressmen’s attention. Their letter is specifically written to the ATF’s acting director, Regina Lombardo.

The letter highlights The ATF’s abuse of its own authority and firearm classification falling outside the regulatory scope of the National Firearms Act (NFA) and Gun Control Act (GCA).

Here is a snippet of the letter written by Congressmen Gaetz and Collins. 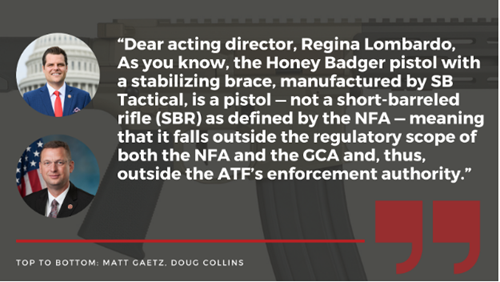 As you know, the Honey Badger pistol with a stabilizing brace, manufactured by SB Tactical, is a pistol - not a short-barreled rifle (SBR) as defined by the NFA — meaning that it falls outside the regulatory scope of both the NFA and the GCA and, thus, outside The ATF’s enforcement authority.”

The ATF’s unwillingness to cooperate with the Department of Justice to solve this matter, along with its attempted agenda to criminalize firearms with braces, is alarming.

Here’s how it affects people like you and me.

Let’s keep fighting for our rights

Thankfully, Congressmen Gaetz and Collins also demanded that the ATF ceases to abuse its authority by threatening small businesses. Times are already difficult enough due to economic disruptions caused by the Covid-19 pandemic.

The response from these two congressmen was fast and positive. The biggest takeaway is that Congressmen Matt Gaetz and Doug Collins listened to the people’s concerns regarding ATF’s ruling and took immediate action.

Both Congressmen acknowledged the abuse of power and infringement against our Second Amendment rights.

Albeit small, this should be considered a victory, or at least a step in the right direction. But we all realize that the battle is not yet won.

The Congressmen gave the ATF a deadline to respond no later than November 1st, 2020.

We will continue to monitor this developing situation and bring updates as they are made available.